Two weeks off from holiday madness and like everyone else, we are suffering a major holiday hangover.  We took down our tree and packed up the decorations earlier than usual, three days after Christmas instead after New Year's.  We had a lot of odd job "to-do" we wanted to accomplish and I was itching to get the house cleaned up and in order.  Not to mention pack away the items Ashlynn was so drawn to picking up and moving around. 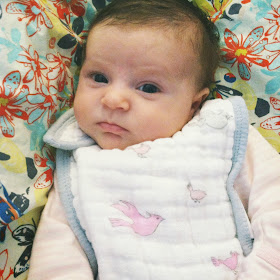 Just a quick update in Stats.  I postponed by post partum appointment since we woke up Friday to 6" of snow and our driveway still wasn't shoveled out by the time I needed to leave.  Kenley and I did make it to her 1 month appointment later that afternoon.  Everything looking good and girlfriend is clocking in at 9lb 11oz, 22" long, and 14.25" for her noggin'.

Pretty sure I haven't updated since I got Mastitis two weeks ago.  When I started the antibiotic we noticed Kenley started getting really fussy.  I read that it could be common since the milk may taste saltier or something like that.  Not sure, turns out it's just our baby.  She quickly moved into her witching hour fussiness and while she sleeps for a nice solid chunk during the night and is content eating, sleeping, and having alert time during the day, come 7pm she is just an unhappy honey.  Fusses usually until 10 or 11pm.

The toddler on the other hand is a bit a of nightmare.  First she was fighting bedtime like crazy, refusing to be put in the crib.  Finally we worked that out (still not without lots of books, songs, rocking and verbal prepping) and then she started waking in the night.  Sometimes it's just a misplaced pacifier others its toddler insomnia. She also occasionally wakes at the ass crack of dawn.  Actually, I'm pretty sure she always does, just some days she cries until we get her and others she'll thankfully hang out quietly until we get up. 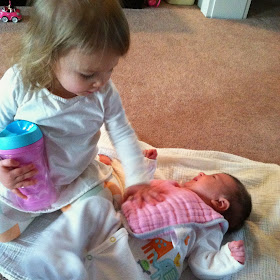 There is a chance girlfriend is teething her upper incisors.  They look like they are getting near to the gum line, but I don't see anything breaking through quite yet.  Aside from the sleep situation, things are really normal for Ashlynn.  I'd say all her behavior changes, not that there were many, when we brought Kenley home are over.  She's back to being a really happy toddler and she really loves seeing what Sissy is up to.  She likes to play mommy and wipe the spit up from her mouth and tuck her in in the bouncer.  Of course, she hasn't figured out how to do these as gently as she should, but it's the thought that counts. 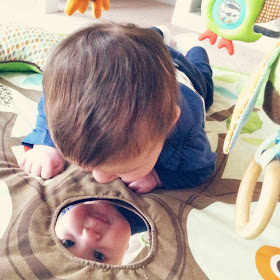 Covered most her changes in her 1 Month update.  I've been trying to be better about giving her some tummy time.  Between a rough toddler who literally trips over her own feet out of no where about twice an hour and two small dogs who are constantly up our ass, I really haven't found the right opportunity to place a fragile newborn on the floor.  She's not a huge fan, but deals with it pretty well and is suprisingly strong for five weeks. 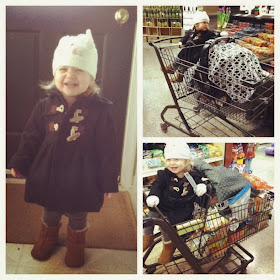 In other two under two updates, the husband finally returned to work yesterday after more than two weeks at home (totally made up for him having to return so quickly after her birth).  Since the weather was finally above the freezing line and the fridge was borderline college status (condiments, expired yogurt, and beer - not really toddler friendly), I headed to the grocery store.

The hardest part had to be the timing and preparing to go.  I usually like to go in the morning, but between Kenley's morning nap and getting Ashlynn to cooperate getting dressed, I couldn't time a baby feeding and leaving enough time before Ashlynn's mid-morning snack and subsequent nap.  THe last thing I wanted was a cranky toddler and crying baby during this trip.  When she woke from her nap, I got her lunch and nursed Kenley while she ate.  I got Ashlynn cleaned up and Kenley changed, bundled in her bunting, and strapped in the carrier.  Then I got Ashlynn with her boots, hat, mittens, and jacket and packed her sippy.  Grabbed my list, my coat, my scarf and got the car running (god bless remote start!).

I got Ashlynn in the car first, then came back and got Kenley.   Drove to the store, parked next to the cart corral (does anyone else find the "mother parking" inconvenient?  I like to be as close to the cart return as possible so I don't have to walk away from my children in the car or keep them in the cart in the cold), grabbed a cart, got Ashlynn strapped in, then placed Kenley in the bottom.  I immediately wondered "Where the hell is the food going to go?" and headed in.  I "tetris'ed" all the groceries around the infant carrier and when the only room left was Kenley's lap, I called it quits.  When I got to check out and the cashier asked me where I'd like to place the bags, I looked her with a blank stare and admitted "I thought you would know!"  Thankfully she called one of the 'helping hands' kids (Wegmans employees who gather the carts) and he helped me to my car with an extra cart while I pushed the kids.

I definitely would have strapped Kenley in my Ergo, which has been my plan and excuse for still not buying a dual stroller, but with my coat and her bunting and it being so cold, I didn't want to waste the time getting her in and out of the carseat in the cold.

The trip wasn't bad at all and I definitely will be able to handle it once we get some warmer (non freezing) weather.  Either way, still an adventurous and memorable "first".