Crazy, feels like forever since I've done an update, but I guess the internet and their crazy week counting got me thrown off.  Either way, I'm officially under the 3 Months to go mark until my due date, so I consider myself 7 Months at this point. 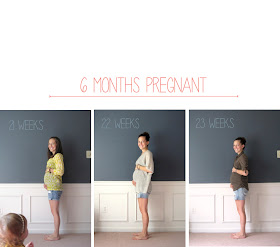 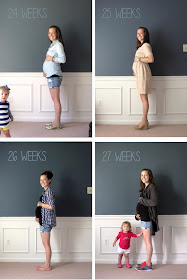 Total weight gain/loss: As of my last appointment at 24 weeks, I was up 11 pounds total.  I gained another 4lbs in between those 4 weeks appointments, and I wouldn't doubt I gained at least another 4lbs if not more when I go in on Thursday for my next appt and Glucose Tolerance Test.   I've been eating zucchini bread, muffins, donuts, ice cream, etc like it's my job.

Is butter a carb?


Maternity clothes? Here and there.  Still wearing my normal non-mat shorts and my beloved Gap Body Maternity Tanks pretty much daily.  Now that it's occasionally cooler (especially in the morning), I thrown on a cardigan, hoodie, or button up to run out for errands.
Stretch marks? Not yet.  Using my Mama Bee Belly Butter, but not regularly enough... need to work on this!

Symptoms: Aw man, last time I didn't really get "pregnancy symptoms" until 3rd tri.  This time they kicked in earlier.  I can't complain too much since I breezed past the morning sickness.  Not quite as exhausted as I was 1st and early 2nd tri, but tired in a different way.  Acid reflux has returned like whoa.  And it doesn't even seem to matter what I eat, around 6:30-7pm it kicks in... however, it seems I've turned to carbs to keep away the foods that make it flare worse.  This also makes me believe I'm going to give birth to a baked good.  Healthy eating has not been my forte.  I mean I'm not pigging out on nachos, hot dogs, and french fries, but I'm not eating simple, or more importantly, balanced meals either.

I also started getting sciatica which I never got with Ashlynn.  Or if I did, I never noticed because of the killer rib/back pain she gave me.  However, Kenley is sooo low compared to Ashlynn.  A always had her tush all squeezed up in my ribs and with K I never feel kicks above my belly button.

Lastly, the Braxton Hicks can get out of control.  It's mostly my fault because I'm definitely not drinking enough water and staying hydrated, but since she's so low, it's incredibly uncomfortable even though painless.


Sleep: Sleep is hit or miss.  Ashlynn is still cutting teeth, but her wake ups are far and few between.  Normally I'm up to pee 1-3x and my sleep isn't quite as disturbed as previous weeks, just a lot of back and joint point in the morning.

Miss Anything?  Energy. It's lacking.  And getting to indulge in our Anniversary Wine, but we decided to save it, so that's not too bad.

Movement: Yes.  Mainly the same times throughout the day, that I remember feeling Ashlynn too.  In the morning, early afternoon, after dinner, and before bed.  Lots of belly moving thumps too.

Food cravings:  Just carbs.  My days usually consist of baked goods, cereal, bagels, pasta, and sandwiches.  I'm still getting plenty of veggies and a bit of protein, but could probably add more.

Anything making you queasy or sick: Not really, but occasionally things just don't taste right or I don't want them after I think I that I do.

Have you started to show yet: YES!

Belly Button in or out? Yeah, it's out.

Wedding rings on or off? On.

Happy or Moody most of the time:  Eh, I'll be honest... I'm pretty moody.  Goes hand and hand with the lack of energy, or that's my alibi.

Looking forward to:  Continuing the nursery progress and being the the home stretch of third tri.