**I drafted this post earlier last week, but just wanted to take a second to thank you all for the sweet messages on my last post, IG, and those directly sent.  I'll catch up on all there is to catch up on tomorrow and throughout the week!**


Unfortunately, I have only have some also unfortunate iPhone photos to go with this awesome recipe so you'll have to trust it tasted much better than it looked! 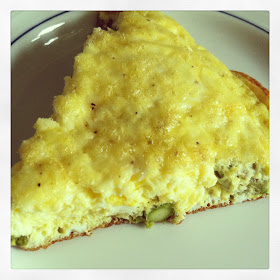 I saw this recipe for an Asparagus and Swiss Frittata on Skinny Taste a few weeks back and decided I'd try making it.  I've never made a quiche or frittata and always wanted to try since I'm a big fan.  I loaded up our grocery cart with eggs, asparagus, and when I went looking for swiss in the cheese shop they only had one option and it was raw milk based (see last post).  I asked the girl at the counter if there were any others that were pasteurized and she suggested substituting a fontina which worked for me.

The original recipe also calls for shallots, but instead I threw in some scallions since we had those in the fridge instead and I already swapped up the cheese.

We all loved this recipe, especially Ashlynn.  Girl just loves her eggs, but it was a great way for her to get some added veggies too.  I find now that she doesn't eat baby purees, she doesn't get quite as many veggies as she did a few months back.  Anyway I can sneak them in that she can actually eat I can - she needs them to be pretty soft since she only has her two bottom teeth! 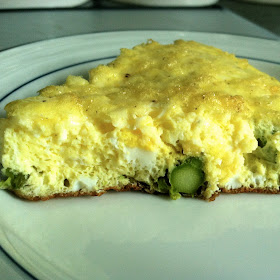 It was great for breakfast the following morning and I hope to make more of these more often, so easy!

Directions:
Prehead oven to 350F
Chop the asparagus on the diagonal into 1/2" pieces and steam until crisp and tender, about 4 minutes.
Heat butter in a 10" oven safe pan over medium heat.  Add scallions and saute until golden, then add steamed asparagus, salt and pepper.

In a medium bowl, whisk eggs, egg whites, grated cheese, milk, salt and pepper.  Add fontina and mix well.  Add eggs to the skillet making sure asparagus is covered.  Cook on medium heat for about 4 minutes until edges begin to set.  Transfer skillet to oven and cook for 16-18 minutes, or until frittata is cooked through.  Slice into wedges and serve!