Once again, just wanted to say thank you for all the well wishes and congratulations posts and messages.   All so sweet and very much appreciated, every single one!

I figure I'm just going to bullet point a bunch of thoughts and happenings, mainly regarding my pregnancy, that I haven't been able to share yet.  I'll try to get together a more put together 1st Tri post, but this scatterbrain approach will just be easiest for now since I feel there is so much to spill! 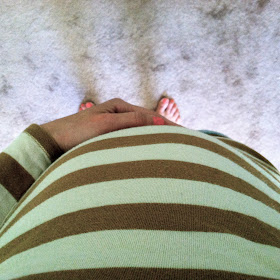 1.  Baby #2 is officially due December 6.  However, since I gave birth to Ashlynn at 35 weeks, my doctors feel my risks for delivery before my due date are high.  Of course, I could carry to term or even go late, but chances favor a November baby.  Fingers crossed LATE November!

2.  Baby #2 while not unplanned, was a big surprise!  You may recall the difficulty we had having Ashlynn, and trepidation, after having lost our first pregnancy.  Unfortunately, the fear doesn't leave you after a successful pregnancy.  I spent most of this first trimester holding my breath, the silver lining though since I was so focused on my day to day with Ashlynn, I didn't have the seconds slowly ticking by where my thoughts were consumed with pregnancy.  Actually, I could sometimes go a full day only to put Ashlynn to bed before remembering that I was actually pregnant and think "oh, maybe I should worry why I don't feel sick".

3. Symptoms.  This pregnancy has been very different from my last two.  While, I am completely EXHAUSTED, I feel minimal morning sickness (if I do, it's usually at night), no sore boobs (nor have they grown, bummer), or no food aversions.  Actually, I can't stop eating!  I think all those factors may be tied in to the fact I was still nursing A when I found out I was pregnant.  After talking to my doctor, I started weaning her within a few days.  I took our time as I didn't want to stop cold turkey, but we were able to fully wean in a month's time.  I don't know if I don't feel nauseous because my hormones were already elevated from producing milk and I definitely think doing both contributed to being wiped out 24/7.  I was already eating a lot the last year getting extra calories and having a fast burning metabolism from nursing, I think my body still tells me I need to eat pretty much all the time because it really feels like it's all I do.

4.  In reference to the above, I owe my breastfeeding journey post.  I have a lot of it drafted and just need to go back and clean it up.  I've been waiting on posting it since I wanted to include the fact that our weaning was brought on by the pregnancy and that it was a factor in why I didn't really let it take a more natural course.

5.  Oh, other lovely symptoms include the world's smallest bladder and not sleeping through the night.  I do remember this happening early on, then fading away before coming back in 3rd Tri the first time... hoping once this kid moves up a tad, I can catch a few Zzz's.

6.  Medical related stuff.  At my first appointment, my OB suggested that since I had history of preterm labor that I be given progesterone shots from week 16 to week 36 to help avoid it happening again.  It's pretty common, and while not fool proof, does seem to help.  After having my 12 week sequential screening, the MFM doctor decided that he was not going to recommend that I get the shots.  Since I fell in that range of weeks between 34-37 the effect of the shots would be little.  That women with previous births prior to 34 weeks may have their risks drop from 50% to 30%, but that my risks of 20% would remain the same.  I'll be given some additional monitoring during my second trimester to make sure no other precautions need to be given.

8.  I still have my at home doppler, and check in on the heartbeat a couple times a week to keep me at ease.  I believe I found Ashlynn's around 11 weeks, this time I was able to find it around 10 wks.  I'm also pretty sure I felt movement last Friday night, which sounds crazy, so I'm sure I should say "I think I felt movement" and then wait a few more weeks before saying "I know I'm feeling it now, I thought I was earlier but wasn't sure", but I'm pretty convinced, it's not like I don't know what to expect this time.   Can't wait for it to pick up!

9.  Diet.  It's definitely confusing to have gone from a pregnancy diet, to eating everything, to being on a dairy and soy restriction, to adding it back slowly, to going back to a pregnancy diet.  I feel like I'm constantly questioning, can I eat that or was just a dairy thing, not a dairy pasteurization or listeria concern type thing.  I also gave up coffee, which sucked!  I'm sure that's another reason I'm so exhausted, especially since Ashlynn loves waking up around 5:30am.

10.  I pretty much nap during her second nap every day.  If not, I can barely make it to dinner, let alone through bedtime routine.   I don't know what I'll do once she consolidates!!

11.  I haven't allowed myself to really think about things like nursery design, dually stroller options, or how the hell I'll manage two under two, but I'm sure it'll all come together.

I think that about covers it for what's been going on the last 3 months.  Feel free to ask anything I might have left out!