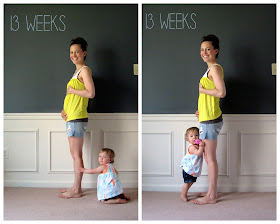 to be honest, I'm not quite sure if I'm pushing out on the left or sucking in on the right
photo taken at 13 Weeks

Total weight gain/loss: Not sure. I weighed myself the day after I found out I was pregnant and between then and my first appt 2 weeks later I gained 5lbs!  I think a lot of this was due that I started weaning and added dairy back full force.  I had actually been underweight since eliminating dairy from my diet, so I think it just bounced back.  I only gained 1 pound between my 8 and 12 week appointments.  So since I'm not planning on returning to my original starting weight post baby, I'll count my weight gain the same as my doctors.  1 pound, though I imagine I've added another 2 or so in the last 2.5 weeks.

Maternity clothes? Not really.  Once in a while I'll throw on an old maternity tank or tee from my last pregnancy just around the house, but I feel like they look funny since I'm not really "filling" them out.  I'm mainly living in my normal jean shorts, camis, and button down shirts or regular looser style tanks.
Stretch marks? Nope.  I was lucky to never get any with Ashlynn, hoping to avoid them again.  Using Mama Bee Belly Butter here and there, but plan on using it daily soon.
Symptoms: Mainly during first tri my only symptom was pure exhaustion.  I think the fact that I was still breastfeeding was adding to that, but now that I'm done, I'm still tired most days.  I'm great until about 2pm, then I usually nap for an hour which lets me get through dinner and bedtime routine.  I still go to bed between 9-10pm (depending what shows are on ::wink::), but I also wake up between 5:30-6:30 on the average, some weeks even early.  I remember peeing all the time at the end of my pregnancy, but I must of forgot how bad it was in the beginning.  I'm hoping that will lighten up now that I'm in second tri.  The only other symptom is my vivid dreams.  Outside of that, oh, and eating everything in sight, I feel great.
Sleep: I wake up usually 1-2x a night to pee, sometimes I wake up because Ashlynn has woken up and can't find her paci.  Lately she's been sleeping through, but a week or two ago she was a teething mess and solid sleep was impossible.


Miss Anything? Cold tasty beers.  I don't think I really missed drinking at all during Ashlynn's pregnancy and for the most part, I don't now either.  Though I do enjoy a refreshing Summer Ale or Shady during a hot summer day.
Movement: Yes.  Feeling fleeting flutters (say that 3x fast).  Usually at night or if I'm just laying still, it's pretty light and very sporadic, but its super low and not really a feeling you can forget!
Food cravings: No crazy cravings.  Although I've eaten a lot of things I usually don't care for, specifically donuts.  Even with my love of baked good, I usually pass right over donuts, but I've probably had 4 or 5 so far this pregnancy.  I also find myself thinking about buffalo tenders every now and then, which is something I wanted with Ashlynn too.

Anything making you queasy or sick: Not really.  I was occasionally getting nauseous at night either right before or after dinner, but that's passed now.
Have you started to show yet: YES!  It's crazy how much earlier you show second time around.  I feel like I look like I did at 20 weeks last time!

Baby is a: don't know!
Belly Button in or out? In, but already looking different.
Wedding rings on or off? On.
Happy or Moody most of the time: Definitely mood swings this trimester, I think a lot of it ties in with my exhaustion.  My poor husband.
Looking forward to:  My belly looking more like a pregnancy belly and not a burrito belly and finding out if we are having a boy or girl!

I'll be keeping up with pregnancy updates monthly like I did with Ashlynn, you'll definitely get the week to week happenings in the regular posts, but these updates won't be a weekly thing.  Hope everyone had a great weekend!